Close
Kerala design shop in Fort Kochi. Made in India.
Home / Blogs / The Wild Side

The Western ghats, one of the worlds richest hotspots for biodiversity, need a wee bit more awareness amongst people. Nilgiri and Anaimalai Hills, the end stretch of Western ghats separates Kerala from Tamil Nadu, giving Kerala its liberal rainfall. These highlands are host to a number of Wildlife Sanctuaries, Jungle Reserves, conserving many endangered and endemic species. 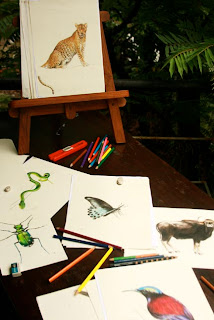 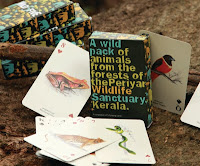 A modest gesture to familiarize you with the Western ghat wildlife, we hand rendered in pencil colour illustrations, the standard set of 52 playing cards. They are divided in four suits of Mammals, Birds, Invertebrates and Amphibians. The most spectacular of the species being awarded the highest value cards and so forth. Each card carries the name of the species in English and the native Malayalam.